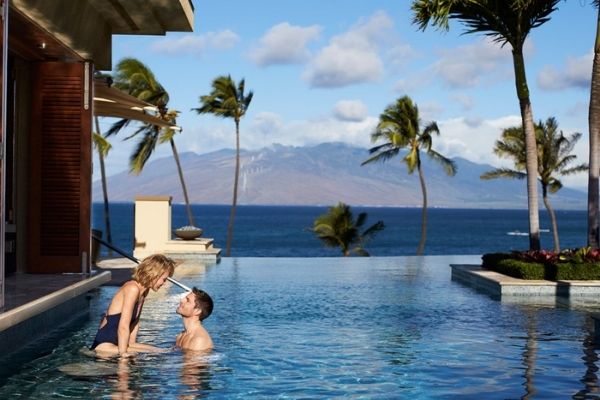 Three of Maui’s greatest luxury hotels, spas, and resorts are in Wailea.

Maui is one of the world’s top vacation spots, and the best beach is at Wailea, East Maui. The beach in Wailea, between Kehei and Makena, is protected from severe surf, allowing children to play safely in the milder waves. Superb snorkeling is a short walk away. The Shops at Wailea is Maui’s and Hawaii’s most posh mall. Wailea has the Fairmont Kea Lani, the Four Seasons Resort, and the Grand Wailea. Three local hotels are among Maui’s finest.

The AAA Four Diamond Award, Conde Nast Traveler’s Gold List, and Travel & Leisure’s Top 25 Hotels in Hawaii are some of the awards. Is there an award the Grand Wailea hasn’t won? Spa Grande is a huge day spa.

It’s like the Roman Baths, with 50,000 square feet of aromatherapy and massage. There’s lots of space, which you’ll need during peak tourism seasons. It can get busy near the slides and river pool. Children and teens rushing around the pools would drive even the most child-friendly tourist to the spa.

The peak season cure The Four Seasons Grand Wailea is serene all year. I saw no children older than 3 or 4 here, and most were in day camp. Plenty of room for poolside lounging.

The Four Seasons’ grandeur and sophistication are everywhere, from the custom lounge chair covers to the Spa at Four Seasons, considered one of the world’s best by Travel & Leisure and Conde Nast. The greatest of the three Wailea luxury hotels for honeymoons, anniversaries, and other romantic trips.

The Fairmont Kea Lani located at 4100 Wailea Alanui, Maui. Fairmont Kea Lani offers elegant accommodations with an adults-only pool and other romantic adult attractions, as well as a child-friendly kids’ camp with a twisting water slide and children’s activities.

It’s my favorite Maui luxury resort because it goes from classy to cheerful to kid-friendly. This is the best luxury resort for a Hawaii family vacation.

As each accommodation is a suite with a couch bed, the Fairmont Kea Lani seems ideal for families. Nick’s Fishmarket Maui, the resort’s costlier restaurant, is my favorite island seafood spot.

These three luxury hotels include upscale facilities, superb food, and first-rate day spas. Each resort offers a unique vacation experience; the key to a great Maui trip is picking the right one.